The Challenge of Illiteracy Globally

In the last decade great gains have been made in eradicating illiteracy globally, however, a long road still lies ahead before full success can be contemplated.

In the Global Literacy Project program areas in South Africa we also see the legacy of exclusion from the apartheid years still having an impact. Literacy rates in South Africa continue to be lower than optimal. The United Nations estimated illiteracy at 12%, or 3.9-million of the 33-million adults in South Africa in 2007. One of the basic causes of this is the lack of money to fund education. Although up to 20% of the nation’s budget is spent on educational programmes, resources are not yet sufficient to counteract decades of insufficient teacher training, lack of supplementary materials in indigenous African languages and the absence of access to books–all key factors for low literacy rates. It must be also noted that South Africans express a keen urge to better themselves but they also want to hold on to indigenous knowledge as contained in their mother tongues. Thus when we discuss illiteracy in South Africa (as well any other society) we have to also ask: “Illiterate in which language?”

Beyond the problem of historical legacy, a more immediate issue is that drop-out rates are also a problem. Some schools can see drop-out rates above 50%, with many students finding no point in continuing as they are completely unplugged from the lessons or they have no sense that school will translate into employment. A substantial portion of the population does not have books in their homes. This often means that the attitudes toward reading are not supportive to the expansion of a culture of reading. Some perspectives we have noted on the ground:

Governments have become increasingly willing to invest in girls’ and women’s rights leading to increasing girls’ enrolment in school. According to UNESCO, the global net enrolment ratio has increased from 80 per cent in 1991 to 88 in 2005. The gender gap in enrolment has shrunk in most regions, and the gender gap in literacy is also narrowing. Still, much remains to be done in relation to girls’ education to ensure that girls finish primary and secondary school, to eliminate violence against girls in school, and to bring more non-enrolled girls into school. Of the estimated 72 million primary-age children that were not in school in 2005, 57 per cent were girls, and this may be an underestimate. (http://www.unifem.org/progress/2008/mdgsGender2.html)

Sub-Saharan Africa has made significant improvements in overall primary education enrolment although a significant percentage of girls still have problematic access to schooling. In South Asia, although absolute enrolment levels have increased for both boys and girls, the gender gap in primary education does not seem to be narrowing. In the Middle East and North Africa, gender disparities are still present although decreasing. (Sources: UN Statistics Millennium Indicator Database; UN Statistics Division database) 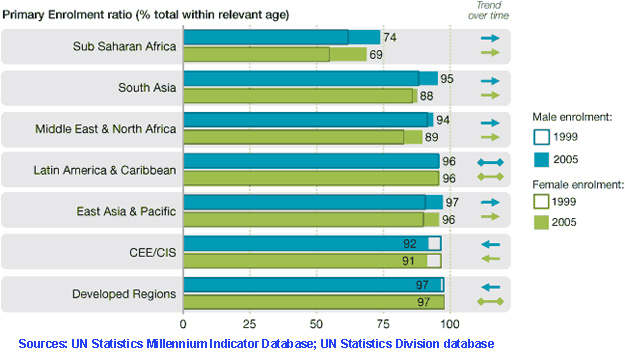 Illiteracy Correlates with Other Development Challenges

ILLITERACY is costing the South African economy as much as R550 billion a year, according to a recent study conducted by Stellenbosch University’s economics department. According to the International Monetary Fund, the current GDP per capita in South Africa is $10 244. The study found that if the quality of schooling in the country was where it should be – a level befitting a middle income country – GDP would be 23 percent to 30 percent higher than it currently was and GDP per capita would be about $12 000 (R86 000) a year (http://www.busrep.co.za/index.php?fSectionId=612&fArticleId=5644371).

In the recently released World Economic Forum Global Competitiveness Report 2010-2011, the South Africa ranked 137th out of 139 countries when it came to the quality of maths and science education and 125th for the quality of primary school education.

Illiteracy has been long correlated to other challenges to human rights. For instance, regions of high illiteracy show high incidences of child labor abuse… 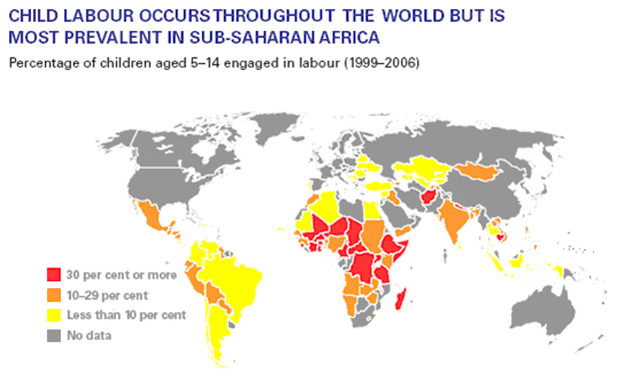