The Republic of Kenya 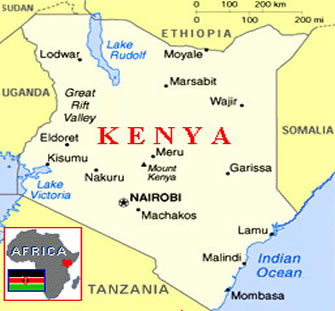 European exploration of Africa increased during the mid-1880s and after the subsequent Berlin Conference (1884), which recognized the Kenyan coast (leased from the Sultan of Zanzibar in 1888) as a British sphere of influence. The opening of the coast and then the interior to British settlers saw them expropriating the best land from the Africans, especially the Kikuyu, and forced many Kenyans onto European farms or themselves switching to cash crops of tobacco, coffee, and tea.

Confrontations flared between indigenous Africans and European settlers over dissatisfaction with the British colonial system, culminating with the so-called Mau Mau Rebellion in 1952–56. This would eventually lead to Kenya’s independence on 12 December 1963.

The World Bank (in its Primary and Secondary Education in Kenya: a Sector Review) noted that the completion rates had been slipping over time – from a high of 95% completion rate at primary level in the 1970s to some 64% in the 1990s. Perhaps most worrying of all was the evidence of deterioration in student performance at the secondary level:

Mean scores in the secondary-completion examination (KCSE), especially in mathematics and the sciences, have fallen over time. If one goes by the KCSE results, students are not even absorbing as much as 10-15% of the curriculum material in subjects, such as mathematics, that they are expected to know by the end of their secondary schooling. (World Bank 1998: 92)

The World Bank also noted the impact of income disparities and inequities in access to both primary and secondary schooling. Despite being officially free, for example, primary education required from parents significant charges, levies and fees. Secondary education was not free, but its cost was more than two times the per capita consumption expenditure for those in the poorest quintile of the population.

Situated on the eastern coast of Africa, Kenya lies astride the equator. Its total area, including 11,230 sq km (4,336 sq mi) of water, is 582,650 sq km (224,962 sq mi). Kenya is notable for its topographical variety. It has a low-lying, fertile coastal region, characterized by coral reefs and islands, which flows into a gradually rising coastal plain then a dry region covered with savanna and thorn bush. About 480 km (300 mi) inland, the plain gives way in the southwest to a high plateau, rising in parts to more than 3,050 m (10,000 ft), on which most of the population and the majority of economic activities are concentrated. The northern section of Kenya, forming three-fifths of the whole territory, is arid and of semi-desert character, as is the bulk of the southeastern quarter.

Both free enterprise and a measure of political debate helped make Kenya one of Africa’s most stable nations after it achieved independence from Britain in 1963. But, more recently, corruption has been an undermining force, and the government-pressured for reform-moved to a multiparty system early in the last decade of the century. Barriers to progress are high population growth, electricity shortages, inefficiency in key sectors.

Kenya has some 44 ethnic groups. The largest are the Kikuyu, forming 20 percent of the population, the Luya, 14 percent; the Luo, 12 percent; the Kalenjin, 11 percent; and the Kisii, 6 percent. Depending on their language and the origin of their migratory pattern about a thousand years ago, ethnic groups in Kenya are classified as Bantu-speakers (69 percent), Nilotic (27 percent), or Cushitic (3 percent).

Tourism is essential to the economy. Population: 28,809,000 (1999 est.). Ecological Problems: Poaching, particularly of the elephant and black rhino is rampant.